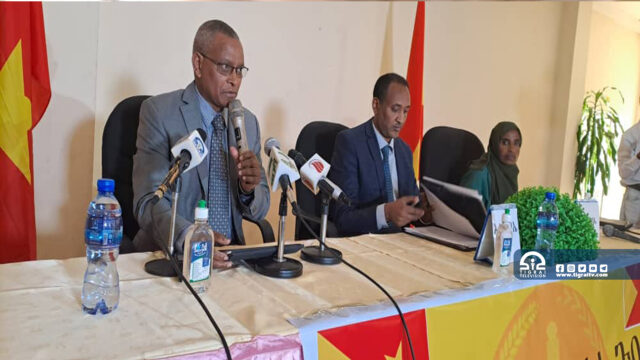 The State Council is discussing current issues and issues related to the peace deal. President of the Regional Government Debretsion Gebremichael (PhD) presented a report to the state council. In his report, the President stated that Peace is not a choice, but a strategic priority of his government.

He also noted Genocidal War has been taking place in collaboration with foreign forces intending to extinct the people of Tigrai.

The president also stated that his government is discharging its duty as per the peace agreement reiterating that they have carried out the disarmament and disengagement of his forces.

He also noted that the federal government is making good progress in implementing the peace deal but he called the Federal Government to redouble its efforts in expediting the withdrawal of foreign and Non –ENDF forces from Tigrai. Debretsion said the presence of these forces is ‘’a threat to the peace process’’ stating that they were supposed to withdraw in line with the disarmament of his forces. But, he says, they are still occupying the territories of Tigrai and torturing people.  The President informed that the forces have started withdrawing while asking for a full and swift withdrawal of the forces.

President Debretsion Gebremichael added humanitarian aid is trickling with more than 6.5 million people still in desperate need of help while noting people in Tigrai are dying on a daily basis due to lack of medicines and medical equipment. He also said they are trying to create what he called a conducive environment to solve political differences in a civilized way.

He also said that IDPs who were displaced from every corner of Tigrai should have been returned to their homes according to the deal but no important step has been taken yet.

Ethiopian Forces Yet to Disengage