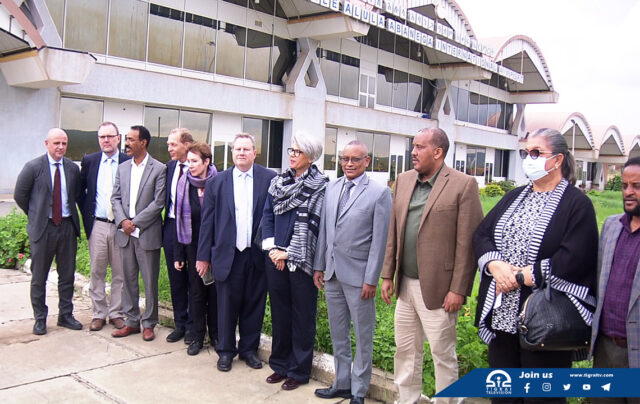 United States Special Envoy to the Horn of African was joined by the European Union’s Special Envoy Annette Weber for a much anticipated visit to Tigrai’s capital on Tuesday. The visit to the capital is one of just a handful, as the state remains severed from the world, with all commercial flights and travels into the state restricted by the Ethiopian government.

The Special envoys were joined by Ambassadors from the United Kingdom, Italy and Canada, as well as high-level officials from the UN. The delegation held talks with President Debretsion Gebremichael and Head for Tigrai’s External Affairs Office, Getachew Reda. Getachew said the discussions were positive and gave the government the opportunity to present its position saying “ we were able to clear up whatever confusion there was with regard to who stands for peace and who is standing in the way.”

According to the head of the Office, discussions revolved around the need to resume basic services to the region and on issues related to Western Tigrai “It’s our understanding that the visitors were given a clear idea of where we stand on the issues of peace and we urged them to put pressure on the authorities in Addis Abeba to be genuinely ready themselves for negotiations”

The government of Tigrai has issued multiple statements saying it will not sit for dialog if vital services are not restored. It has been more than a year since the Ethiopian government started its siege on Tigrai that has discontinued all basic services into the region including telecommunication, electricity and banking.